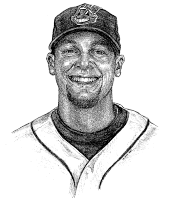 Brian Anderson was born in Portsmouth, Virginia, on April 26, 1972, and was raised in Geneva, Ohio, where he played baseball, basketball and golf for the Geneva Eagles. Continuing to Wright State University, he blossomed into the most coveted left-handed pitcher in college baseball. The California Angels made him the third player selected in the 1993 Major League draft, and he made his Major League debut in September of that year.

His career record was 82-83, including 12 complete games and four shutouts, with a 4.74 earned run average. His combined record for three seasons with the Indians was 16-13.

His effervescent personality propelled him into a career in broadcasting with the Tampa Bay Rays. He has been the Rays’ television analyst since 2011.