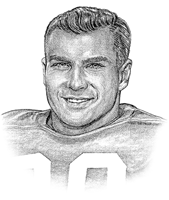 Dick Brubaker was the epitome of determination.

The one-time standout at Shaker Heights High, where the Raiders won the Lake Erie League championship in 1949, he played two seasons at Ohio Wesleyan University. The Bishops won the Ohio Athletic Conference title in 1951.

Seeking a bigger challenge, Brubaker transferred to Ohio State and approached legendary coach Woody Hayes to allow him to play as a walk-on wide receiver. After sitting out a season, he was rewarded for his hard work when he made the first team midway through the 1953 season.

In 1954, Brubaker and John Borton were elected co-captains by their teammates. They helped guide the Buckeyes to the school’s first 10-0 record, a Rose Bowl victory against Southern Cal and the second national championship in school history.

After playing with the Chicago Cardinals in 1955, he was drafted by the navy and served 18 months. He played part of the 1957 season with the Cardinals, before setting his sights on a law degree that he obtained from Western Reserve University. He returned to the football field in 1960, playing a final season for the Buffalo Bills of the newly-formed American Football League.

He went on to a long and illustrious legal career with Calfee, Halter & Griswold in Cleveland, specializing in estates and trusts law. With his wife, Nancy, they raised three children and live in Newbury.

In MemoryMucha, Barb
Scroll to top