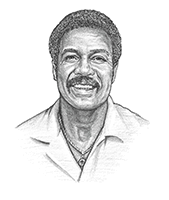 Otis Chapman is one of the most decorated players in the history of racquetball. From 1987 through 2010, he collected 32 national and international championships in either singles or doubles play.

For his extraordinary accomplishments, he becomes the first-ever inductee into the racquetball wing of the Greater Cleveland Sports Hall of Fame.

Remarkably, the induction is Chapman’s fifth in a sports Hall of Fame.

He didn’t start competing on the courts of the Cleveland YMCA until he was 45 and won his first racquetball title at the age of 53 in 1985 in the national doubles tournament.

Before he put down his racquet, Chapman had won 15 international championships in just 13 years (from 1998 through 2010). All but one of the titles came in doubles, including the 2010 Men’s 75+ division when Chapman was 77 years old.

He also won eight national singles championships (from 1987 through 2000), five national doubles crowns (from 1985 through 1998) and four consecutive national masters doubles titles from 2007 through 2010.

Chapman, at age 87, remains in top physical shape and while he has dozens of trophies, plaques, and medals, he says he is most proud of an award that cites him for good sportsmanship and fair play.