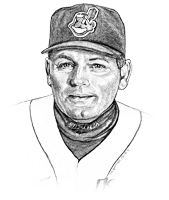 Although denied the 1997 World Series championship in a heart-breaking loss in extra innings in the seventh game against the Florida Marlins, Mike Hargrove will remain one of the most beloved managers in Cleveland Indians history.

A native of Perryton, Texas (the city’s baseball stadium is named in his honor), Hargrove played 7 years for the Tribe before managing it for nine years. He began his playing career with Texas before coming to Cleveland via a trade with San Diego. As a manager, Hargove skippered both Baltimore and Seattle after leaving Cleveland.

Voted American League Rookie of the Year in 1974, Hargrove carried the most unique of nicknames: The Human Rain Delay. He earned it through his ritual between pitches of stepping out of the batter’s box to readjust his hitting gloves, hitch up his pants, rub his nose, knock dirt from his spikes and tamp on his helmet.

Hargrove played for 12 years. He had a career batting average of .290 and was an All-Star in 1975. He retired in 1985, and within two years was managing Class A Kinston of the Carolina League. Hargrove was voted the circuit’s Manager of the Year in his rookie season.