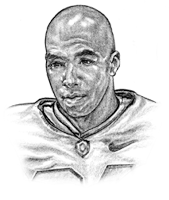 He ran hard and far in six NFL seasons, but Raymont Harris may be best remembered for two evenings of football that saw him dart in and around rivals and directly into a pair of record books. One of the nights came in college, the other in high school. Harris, a native of Lorain, produced the greatest performance by an Ohio State University running back in a bowl game when he piled up 235 yards in the Buckeyes’ 28-21 victory over Brigham Young in the 1993 Holiday Bowl.

A few years earlier, as a senior at Admiral King High School, Harris delivered a performance that is still talked about in Lorain County football circles. Facing cross-town rival Lorain High, Harris ran for 332 yards and five touchdowns as the Admirals triumphed.

Harris was selected in the fourth round of the 1994 NFL Draft by the Chicago Bears, the 114th overall pick and made an immediate impact. The Bears were knocked out of the playoffs in the next game by eventual Super Bowl champion San Francisco.

Harris retired from pro football in 2001. He joined The Ohio State University Department of Athletics in March 2010 as director of development and resides in New Albany with his wife, Leslie, and children Shakia, Elijah, and Olivia.