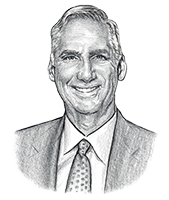 Oliver Luck is a man for all seasons and all sports.

The Cleveland native has been a quarterback at the scholastic, collegiate and professional levels, athletic director at West Virginia University, his alma mater, and president of Major League Soccer’s Houston Dynamo.

Luck, a 1978 graduate of St. Ignatius High School where he starred in both football and basketball, attended West Virginia where he established school records for touchdown passes and completions. He also led the Mountaineers to a 26-6 upset of Florida in the 1981 Peach Bowl.

Selected by Houston in the second round of the 1982 NFL draft, Luck played five years with the Oilers. When he wasn’t throwing touchdown passes, he worked on earning his law degree from the University of Texas.

Following retirement, Luck became vice president  of business development for the NFL, then headed for Germany where he served as general manager of the Frankfurt Galaxy of the World League of American Football and the Rhein Fire of NFL Europe. Luck was eventually named President and CEO of NFL Europe.

Luck returned home in 2001 to become chief executive of the Harris County-Houston Sports Authority, overseeing development and management of stadiums for MLB’s Astros and the NFL’s Texans and an arena for the NBA’s Rockets.

Four years later, he became the first president of MLS’s Houston Dynamo. Luck not only helped secure funding for the club’s $80 million soccer complex, he was at the helm for the Dynamo’s two league championships.

When his alma mater called in 2010, Luck returned to West Virginia to serve as the university’s athletic director.

He is currently Executive Vice President for regulatory affairs and strategic partnerships for the NCAA.

Luck is married to the former Kathy Wilson. They have four children, Andrew, Mary Ellen, Emily and Addison.

Andrew followed in his father’s footsteps. The No. 1 selection of the 2012 NFL draft out of Stanford, he quarterbacks the Indianapolis Colts.