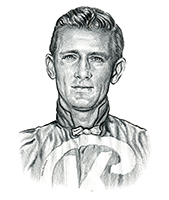 Mike Manganello reached the pinnacle of a jockey’s career when he won the world’s most famous horse race: the Kentucky Derby.

Manganello was in the saddle of Dust Commander in 1970 when they upset the 96th running of the Run for the Roses. The margin of victory was five lengths, thanks largely in part to Manganello’s rail-hugging ride that helped save the colt valuable ground in the testing 1¼-mile race.

A native of Hartford, Conn., Manganello was far from a one-race wonder. In a career that spanned nearly 30 years, and included five Kentucky Derby mounts, Manganello won the Blue Grass Stakes (on Dust Commander), the Ohio Derby at Thistledown, and numerous riding titles.

Manganello scored his first winner at the age of 18 in 1960 at the Fair Grounds in New Orleans. Soon afterward, he moved his family to Bedford Heights and began a stretch of successful seasons at tracks around Greater Cleveland: Thistledown, Randall Park and Cranwood.

His domination of the jocks’ colony saw him win or share every Thistledown championship from 1964 through 1968. He also added Randall and Cranwood crowns.

Manganello was aboard Te Vega in the 1968 Ohio Derby as the colt became the first Ohio-bred to win the state’s most prestigious race.

The pull of the Blue Grass State eventually landed Manganello at Churchill Downs, Keeneland and Turfway Park, a move that led to his association with Don Combs, the trainer of Dust Commander.

In the winter, Manganello rode at Sunshine Park (now Tampa Bay Downs) where he won six riding titles. It’s also where he registered his 2,500thcareer winner.

But it’s the Kentucky Derby victory that Manganello will be best remembered for. He says to this day he can feel the song “My Old Kentucky Home” reverberating through his body.