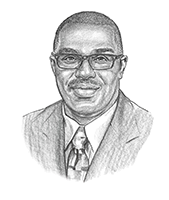 Tony excelled equally in basketball. He was a four-year starting point guard and led the Vikings to the Division I state championship in 1992. He was the captain of both football and basketball teams.

He was not heavily recruited for basketball because it was believed he intended to play football in college, which was not the case. Marquette basketball coach Kevin O’Neil, however, was persistent and landed Tony as his star recruit. Tony actually exceeded expectations. He was the starting point guard for all four years from the beginning of the season in 1991 to the end of the season in 1995. He was the catalyst for Marquette’s back-to-back NCAA tournament teams. In 1994, Tony was the primary reason Marquette could break Kentucky’s full-court press and advance to the sweet sixteen. The next year, with Tony again in the starring role, Marquette reached the championship game of the NIT tournament.

For his college career, Tony averaged 8.3 points and 7.8 assists. His total of 956 assists ranks eighth all-time in Division I college history.

Tony continued to play professionally for 13 years, mostly overseas in Belgium, Lithuania, the Netherlands, and England. He was an all-star in the Dutch League.

He was inducted into the Marquette Hall of Fame in 2011.