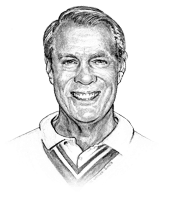 At Bexley High School in Columbus he was chosen “Athlete of the Year” his senior year and set the school’s scoring record in basketball, 42 points. He went on to Ohio State starting on Fred Taylor’s freshman basketball squad. Teammates Larry Siegfried and Richie Hoyt were team members who later played on the only Buckeye team to win the NCAA National Championship. Unfortunately an injury ended Patrick’s collegiate career at the end of his freshman season.

At age 35, Patrick was asked to play squash at the first public squash courts ever built in New York. Eureka! It was the greatest sport he had ever experienced. Within two years he had moved up to the A ranks in New York.

In 1978 business brought Patrick to Cleveland. The 13th Street Racquet Club was just opening. He entered his first Nationals the next year in Detroit and was thrashed in the first round. Things changed from then on.

He won 6 state titles, two in Ohio and four in Michigan, and 13 Cleveland championships. At 49 in the National Championships he beat the number 1 seed.

In 1995 he reached the National Singles 55 plus finals and lost a one point tiebreaker in the fifth and final game but he struck gold in 1996 sweeping to victory in Denver without the loss of a game to win the US 55 plus National Championship. He won his second National Championship, 60 and over, in 1999 beating the leading player in North America who had won 13 US Championships, 6 Canadian Championships, and several world titles.

The following year in Boston he picked up his third National Championship coming back from almost being down and out to win the crown.

Patrick has been in the advertising agency business as his “day job.” He started in New York and now owns his own agency, PJ Morin Inc., in Cleveland. He keeps his interest in squash alive today by assisting Urban Squash Cleveland with their marketing efforts.

Patrick, and his wife Debbie, live in Bratenahl. Debbie is Director of the Center for Educational Leadership at Cleveland State University.