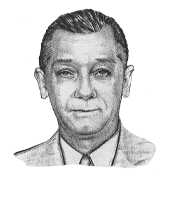 A true “iron man” pitcher who worked his way up through the Cleveland sandlots, playing in all classes from E to A. Started pitching in Class E at the age of 15, winning 13 of 15 games, averaging 13 strikeouts per contest and hurling two double headers. In 1923-24-25, he was the only pitcher on the Suchan Café roster in Class B. Starting all of their games he pitched the team to the championship finals one season. Later, playing with McAllister Tires, he pitched and won both games of a double header to clinch the Class a championship for his team. While with the Favorite Knits in Class A he pitched three full innings against the Boston Braves of the National League in an Amateur Day game at league Park.