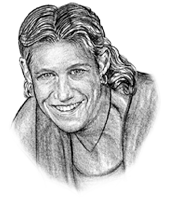 Vonda Ward grew up in a sporting family. Both her parents trained racehorses at Northfield Park. Vonda, however, enjoyed spectacular success in two totally unrelated athletic careers before she was 30.

The six-foot, six-inch native of Macedonia, Ohio, was a two-time high school All-American in basketball at Trinity High School in Garfield Heights. She led her team to the state championship in 1990. She continued her basketball career at the University of Tennessee, where she played on legendary coach Pat Summitt’s national runnerup in 1995. In the late 1990s she played pro basketball briefly in Germany and later with the Denver Xplosion of the American Basketball League.

Vonda then turned her attention to women’s professional boxing, which was at the advent of its popularity. Vonda enjoyed a meteroric rise as a heavyweight. She knocked out her first 15 opponents, setting up a showdown for the women’s IBA world heavyweight championship which she won with a hard-fought 10-round decision over Monica McGowan on Aug. 16, 2002, in Canton, Ohio.

Vonda was still unbeaten, having won 20 fights in a row, when she lost her title to the dangerous Ann Wolfe, who knocked her out in the first round in a nationally televised fight on May 8, 2004, in Biloxi, Miss. Vonda celebrated her return to the ring seven months later in Cleveland with a fourth round knockout in what turned out to be her last fight. Her record stands at 22-1, with 17 wins by knockout. There have been several attempts to match her with Leila Ali, daughter of the all-time great heavyweight champion Muhammad Ali, but Ali has rejected every proposal.

Although she has not had a fight for almost eight years, Vonda remains in fighting shape. At the age of 39 she is in the gym every day in her job as a personal trainer.