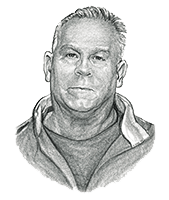 His treble of excellence spans nearly 50 years and includes performances that earned Beutel national recognition on the football field as well as a place in the Ohio High School Athletic Association’s girls’ basketball Â recordbook.

A native of Willowick, Beutel attended Eastlake North High School (Class of 1968) where he excelled in football and basketball, earning All-Ohio honors in both sports. He was recruited to play basketball at Ohio State University, but decided to play football at Big Ten rival Northwestern.

The decision worked out quite well. Beutel earned Big Ten honors as well as being named an ABC- TV National Player of the Week. He led the Wildcats in tackles in 1972 and ranked third in The Big Ten in that category in the same season.

When his playing days were over, Beutel took his bachelor’s degree in education and returned to his alma mater where he coached North’s girls basketball team for 25 years. His Lady Rangers compiled a record of 461-134 with 12 district titles and two trips to the state tournament’s final four.

Beutel considers coaching his daughters, Britt and Brooke, as one of the highlights of his career.

After spending a combined 40 years as student and a teacher in the Willoughby-Eastlake school system, Beutel retired in 2005. But not for long. A year later, he was approached and accepted the head coaching job of the girls’ basketball team at Gilmour Academy. In eight years, he has led the Lady Lancers to a record of 144-47.

Beutel’s second bite of the apple has lifted his career coaching victory total to 605, which ranks him seventh on the all-time list of Ohio girls’ basketball coaches.

Beutel and his wife Claudia live in Chardon.