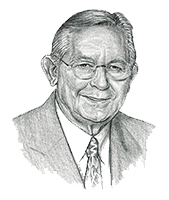 A lifelong baseball fan, Larry Dolan bought the Cleveland Indians in February, 2000, and proceeded to make his mark not only in his hometown but within baseball. A lawyer by profession with special skills in the field of labor relations, he was largely credited with negotiating long-term labor peace between the owners and players’ union when he served on the Major League Baseball Ownership Committee and Executive Council. He also served on the MLB Diversity Committee.

His exploits as an athlete also should not be overlooked. Son of an inventor, Larry grew up in Cleveland Heights and attended St. Ignatius High School, where he played both football and baseball. He threw a touchdown pass in the Wildcats’ 13-0 victory over East Tech in the 1949 Charity Game before 30,227 at the Stadium. He was the catcher on the baseball team which also won the Senate championship in 1950.

He went on to the University of Notre Dame where he played on the freshman football team. After graduating in 1955 he remained at Notre Dame for law school. He then served as an officer in the United States Marine Corps for two years before returning home in 1958 to become an assistant prosecutor in Geauga County.

He also joined a law firm now known as Thrasher, Dinsmore and Dolan. He soon became a partner in the firm and later was named president and managing partner.

For nearly 25 years Larry managed the firm’s practice and professional development, building a reputation of excellence in general, civil and business law.

Now 83, Larry has retired from active management of the Indians. The club is now run by his son, Paul. Larry and his wife, Eva, have six children and seventeen grandchildren.