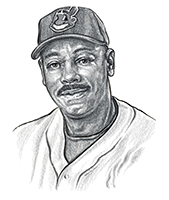 Ellis Burks was a manager’s dream. A major league player who was one part speed, one part power, and one part defense.

His talents were in such demand that Burks enjoyed an 18-year career with five teams, including opening and a closing acts with the team that first signed him, the Boston Red Sox.

In between were stints with the Chicago White Sox, Colorado Rockies, San Francisco Giants and the Cleveland Indians. Burks enjoyed his time in Cleveland, for he has made Greater Cleveland his home, residing in Chagrin Falls.

A first round pick by the Red Sox in the 1983 Major League Baseball draft, Burks became Boston’s starting centerfielder as a rookie in 1987.  He immediately excelled, becoming only the third player in team history to hit 20 home runs and steal 20 bases (Burks actually stole 27) in a single season.

His exploits earned him spots on both Baseball Digest and Topps’ all-rookie teams.

In 1990, Burks went into the Red Sox record book when he became the second player in team history to hit two home runs in the same inning. His rare feat (he was only the 25th in MLB history to do so) came at the expense of the Cleveland Indians at old Municipal Stadium.

Among Burks other accomplishments are twice being voted to the American League All-Star team, winning a Golden Glove for his play in centerfield and two Silver Slugger Awards.

Burks is currently working for the San Francisco Giants.