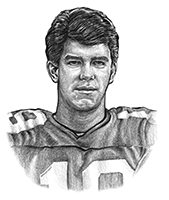 Tom Tupa left a lasting imprint on football at every level. From his state championship days at Brecksville High School to Ohio State to the NFL, Tupa established himself with both his passing arm and punting skills.

As quarterback at Brecksville, he helped lead the Bees to the Ohio title in 1983. He also lettered in basketball and baseball. He joined Ohio State, where he was the punter for four seasons, setting the top two seasonal punting averages as a freshman and senior. He was the starting quarterback in 1987, passing for 2,252 yards and 15 touchdowns. He was named All-American and All-Big 10 punter that year and played in the 1988 Hula Bowl.

Tupa was drafted by the Phoenix Cardinals in the third round, the 68th pick overall, to begin an 18-year professional career. Primarily a punter after joining the Indianapolis Colts in 1992, he was with the Browns for three seasons where he became notable for scoring the league’s first two-point conversion off a fake extra-point attempt against Cincinnati in the 1994 opener. As holder, he scored two more conversions that year to earn the moniker “Two Point Tupa.”

He kicked for New England and the New York Jets, earning Pro Bowl and All-Pro honors in 1999 with the Jets. He was with Tampa Bay for two seasons, punting for the Buccaneers in 2002 as they won Super Bowl XXXVII against Oakland.

Tupa finished his pro career after two years with the Washington Redskins in 2005. As a pro, he averaged 43.4 yards per punt, passing for 3,430 yards and 12 touchdowns.

He returned to his home town to help coach at his alma mater high school, where his three sons and daughter played. Married to Beth, he is also Brecksville Recreation Director.