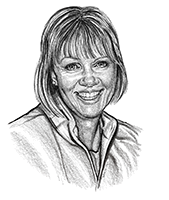 Her classmates at Brush High School in Lyndhurst remember her as Jeanne Marie Norton, where she was the most precocious teenage bowler in Greater Cleveland. At the age of 14 she bowled in adult leagues, and six years later she turned pro.

She married in 1980 at age 22 and became Jeanne Maiden, which is how the local bowling world knew her. She was Cleveland’s “Queen of Bowling” in 1981, ’82 and ’83. She continued to dominate women’s professional bowling for the rest of the decade.

In 1992, she married Stan Naccarato and became Jeanne Maiden-Naccarato, the name on the plaque when she was inducted into the Women’s International Bowling Congress Hall of Fame in 1999, and to the Professional Women’s Bowling Association Hall of Fame in 2002.

Her husband, Stan, died in 2016 at the age of 88. Jeanne lives in Tacoma, Washington, where she owns a bowling center: Tower Lanes.

One of the founders of the Cleveland Womenâ€™s Bowling Association, she served as its secretary from the time it was founded in 1918 until her retirement in 1945. Also founded the Central States Ladies Bowling Association and served as its secretary for 33 years. Was a member of the Board of Directors of the Womenâ€™s International Bowling Congress for seven years and an officer for four. Elected to the CWBA Hall of Fame in 1956 and to the WIBC Hall of Fame in 1959.
(Deceased)

One of Clevelandâ€™s finest bowlers during the 1930â€™s, 40â€™s and 50â€™s, he and his partner, Steve Nagy set a record of 1453 in the doubles event of the American Bowling Congress Tournament in 1952 which still stood in 1981. Klares contributed a 755 three-game series to that score. He finished fifth in the all-events of that ABC Tournament and his team won the team all-events crown. He bowled three sanctioned 300 games and three series of 800 or better during his career, averaging 191 for 30 ABC tournaments.

A member of the Cole Furniture team which won the Womenâ€™s International Bowling Congress national title in 1952, she also shared the WIBC Doubles crown in 1958. Won Ohio state doubles and all-events championships and played for five Ohio state championship teams. Also played on three City of Cleveland championship teams and won ladies City titles in doubles, singles and all-events, as well as the City Match-Game championship. Twice elected Queen of Bowlers she was inducted into the Cleveland Womenâ€™s Bowling Association Hall of Fame in 1959.
(Deceased)

One of Ohioâ€™s all-time great lady bowlers, she was named Queen of the Clevelandâ€™s Lady Bowlers four times. Captained the Cole Furniture team which won the Womenâ€™s International Bowling Congress national title in 1952 and bowled on six Ohio state championship and seven Cleveland city championship teams. Won ten Ohio individual titles and 16 City crowns, including doubles, singles and all-events in both competitions. Also won two Central States single titles and played on three Central States championship teams. Her 203 average in 1965-66 was the second best in the nation and her 198 mark in 1956-57 ranked her third that season. Elected to the Cleveland Womenâ€™s Bowling Association Hall of Fame in 1973.

Worked for many years to provide opportunities and competition for black bowlers. Formed the Cleveland Bowlers group in the 1930â€™s with 40 members. Now known as the Cleveland Bowling Senate, it currently numbers more than 3,000 bowlers in its membership. Also helped found the National Bowling Association which currently has over 35,000 members. Was first black to be elected to American Bowling Congress Hall of Fame, in 1978.

Winner of the BPAA National Doubles title in 1960, runner-up in 1956 when she also set a national womenâ€™s record with a 205 season average. Finalist in the BPAA All-Star Tournament six times, finishing second in 1960, third in 1949. Won singles, doubles and all-events titles in Ohio State Womensâ€™s Bowling Association Tournament in 1959, four state all-events titles in all. Elected to Cleveland Womenâ€™s Bowling association Hall of Fame in 1970.

Won American Bowling Congress Doubles title (with Joe Kissoff) in 1953. Finished second in the ABC All-Events in 1951 and the ABC Singles in 1952. Won Cleveland City Doubles title with Kissoff in 1951 and bowled on Cleveland and Ohio championship teams. Averaged 202 for ten ABC classics and 197 for 32 ABC appearances. Bowled three 300 games and an 806 series.

Charter member of Professional Bowlers Association Hall of Fame (1974) and inducted into American Bowling Congress Hall of Fame, 1977. Ten-time PBA champion, winner of the BPAA All-Star championship in 1960, the ABC masters title in 1963 and the ABC Doubles in 1967. Twice Cleveland City Match-Game champion. Bowled 12 sanctioned 300 games and an 843 series. Had 199 average for 25 ABC tournament appearances.

Publisher of The Cleveland Kegler, one of the two oldest weekly bowling publications in the country, he was elevated to both the American Bowling Congress Hall of Fame and the Greater Cleveland Bowling Association Hall of Fame in 1971. Started the first charity bowling tournament in the nation. Began the Cleveland Press Charity Bowling Tournament and was co-originator of the Cleveland Plain Dealer â€œI Beat The Championâ€ Charity Tournament.
(Deceased)