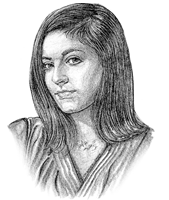 An accomplished gymnast beyond her years, she was the youngest competitor at the Junior Pan American Games in Sao Paulo, Brazil, in 1992, where she won four gold medals and was the all-around silver medalist at age 10.

Her international stature only continued to grow as she developed under famed coach Bela Karolyi.

A seasoned veteran at age 14, she was the youngest member of the gold-medal winning 1996 Olympic Team, named “The Magnificent Seven,” as she cemented herself as one of the sport’s elite competitors.  She showed her courage and determination at the Olympics as she competed despite a stress fracture in her right tibia.

After recovering from her injury, Moceanu trained under coach Luminita Miscenco and won gold medals in the vault and balance beam at the 1998 U.S. Senior Nationals.  At that year’s Goodwill Games in New York, she became the only American to win the all-around gold medal.

Once again, injuries took their toll and she retired in 2000.

Graduating from John Carroll University in 1999 with a degree in business management, she continues to coach and promote her sport in the area and at the national level.  She married Dr. Michael Canales, a former Ohio State gymnast, in 2006 and the couple have two children.

One of the nation’s leading contributors to the sport of gymnastics, he coached the men’s and women’s gymnastics teams at Kent State University for over 20 years and sponsored children’s gymnastics teams at the University for 17 years. Served as a member of the U.S. Olympic Committee for Men’s Gymnastics from 1960 through 1972 and was the associate coach of the 1960 U.S. Women’s Gymnastics Team in Rome. Was a judge at the 1959 Pan-American Games, was National Physical Director of the Slovak Sokol from 1954 to 1962 and Coach-Manager of the National Sokol Teams at the 100th Sokol Anniversary celebration in Vienna, Austria in 1960.

Won eight Ohio AAU Open Championships between 1946 and 1954, including the all-around title in 1954. Active as a member of the American Turners for over 40 years and served as a member of the Lake Erie AAU Gymnastics Committee for ten years. Coached many Junior Olympic all-around champions in the Cleveland area after her retirement as an active competitor.

Began his career at Cleveland East Tech High where he was a three-time state tumbling champion (1933-34-35). All-American gymnast at the University of Illinois where he became the first gymnastics athlete ever to win seven NCAA championships. Also won National AAU Tumbling Championships in 1938, 1939 and 1940. Went on to coach and judge gymnastics at high school, college and national levels until his retirement in 1975. Enshrined in the National Association of Gymnastics Coaches section of the Helms Hall of Fame in 1966.

Active at many levels in a variety of sports activities during his life, with emphasis on gymnastics. Received Helms Foundation Hall of Fame Award in 1961 for his contributions to that sport. Served as director of physical education at East Tech from 1913-1930 and chief of playgrounds and community centers for Cleveland Board of Education from 1930-53.

NCAA All Around co-champion at University of Illinois in 1940. Also qualified for 1940 Olympic team, but Games were cancelled. National AAU floor exercise champion and runner-up on horizontal and parallel bars in 1946. Big Ten All Around, Horizontal Bar and Parallel Bars champion in 1939, competed for U.S. International Team vs. Czechoslovakia in 1947. Attended Cleveland East Tech High.

In 1936 he won the All-Around Title in the Northeastern District of the American Sokol Organization. That same year in AAU competition he won the Side Horse and Parallel Bars competition. A national title was his in the All-around category in 1937. In addition to a highly successful competitive career, he subsequently lent leadership to the sport as a coach and administrator.