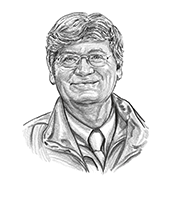 Hockey in Northeast Ohio had a good friend in John Malloy. Make that a great friend.

The veteran high school and prep team coach was also instrumental as an administrator and coordinator at numerous levels of the game. Whether it was winning a record number of games from the bench, establishing competitive balance for levels of play, or helping to increase skating programs, Malloy maintained a principled focus of respect.

A native of Cincinnati and graduate of Miami University, Malloy’s high school coaching career began in 1981 at Cleveland Heights High, where he went 292-88-5. The Tigers were state champions in 1987 and runner-up the previous season. During two seasons at Rocky River High, his teams went 36-24-2 and won a pair of Baron Cup II titles.

He joined Gilmour Academy as the school’s first prep team coach in 1998 and became the school’s high school coach in 2004, going 278-225-33 through the 2018-19 season. The Lancers were state runner-up in 2008 and a final four club in 2011. His winning totals place him near the top of the Ohio High School Athletic Association coaching ranks.

Malloy was instrumental in establishing parity for the growing Greater Cleveland High School League with the formation of divisions for competitive play. To that end, the Great Lakes Hockey League was formed in recent years for the top-tier area teams.

Just as important during his Gilmour Academy tenure, the school’s arena was expanded and opened to the community with skating classes and youth hockey. Malloy’s duties expanded beyond coaching as an administrator.

Malloy is married to wife Erin, with children J.T. and Jayne. 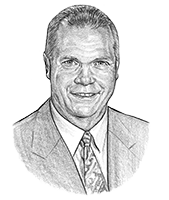 In the fast-paced game where emotions run high, Beard was able to keep the ideals of sportsmanship in the forefront. While not one to shy from stating his position, it was never Beard’s place to lose respect for the human side of competition.

It was just part of the base, along with solid knowledge of the game, that enabled him to establish University School as a perennial state-wide contender. With Beard at the helm for 16 seasons (1998-2014), the Preppers won two state championships  (2003 and 2009), and had two runner-up finishes (2002 and 2004). US won nine district titles, earning nine trips to the state tournament’s final four.

A 1980 Cleveland Heights High graduate, Beard played hockey and baseball for the Tigers, At Princeton University, he logged one season of hockey and was a four-year pitcher for the New Jersey-based Tigers before graduating in 1985 with a sociology degree.

On the baseball side, he won several team awards, served as co-captain his senior season and stands tied for third on the school’s all-time list with 19 career victories. His .760 career winning percentage (19-6 in 49 appearances) ranks fourth.

Before taking over at US, Beard was an assistant hockey coach at Cleveland Heights that included a state championship, a state runner-up and two Baron Cup title. He served as an assistant coach at Kent State for two years, at Padua High for three and Team Ohio Midget AAA for three. He found time to be pitching coach At Case Western Reserve University for the 1987 season.

Beard was head hockey coach at Upper Arlington High for one season, going 21-9-3 in 2016-17. Living in Perrysburg, Ohio, plans call for Beard to work at Toledo St. Francis de Sales High, where he will also serve as hockey assistant coach.

Married to Courtney, the Beards have two children.

Mike Bartley was born to be an ice guy. He had the perfect makeup to coach winning hockey games.

No high school coach in Ohio has ever won more games than Bartley, who retired from coaching Shaker Heights High after winning the school’s fourth state title in 2013. Bartley’s final victory gave him 640, all of them with the Red Raiders for 37 seasons.

The Red Raiders won nine Baron Cup Tournament titles during his tenure, more than any other coach can claim for Northeast Ohio bragging rights.

But bragging rights would not be how the low-keyed Bartley would ever approach the accomplishment. It was not in his nature to put his wins above victories for the team. In his cramped office at Thornton Park, all of the Red Raiders’ team trophies and photos took the high-profile spots.

For Bartley, cozy Thornton Park was more of a classroom than rink. Throughout all the seasons, in both summer and fall outside the high school schedule, coaching younger players also played a part in the program’s success.

From mites and squirts to pee-wees and bantams, Bartley could be found going about his patient way teaching the game he loved. You could call him the minister of Thornton Park.

“It’s been sort of a ministry I’ve had in my life,” he said.

Growing up in Sarnia, Ontario, Bartley learned the game at the grass roots level like many Canadians in the junior ranks. He took his lessons to Bowling Green State University, and then played in the minor leagues.

Settling on his teaching role in elementary physical education, he took over the Shaker Heights High program during the disco era. With his trade-mark Maple Leaf tie, he weathered all the tough times and the good ones in the dedicated fashion he wanted – that of a teacher.

Active in the sport of hockey for 58 years as a player, coach, goal judge, timekeeper and supervisor of minor official. Played 16 seasons of amateur hockey, including six with the Blepp-Coombs teams of the ’30s. Coached at Western Reserve and Case tech from 1939 to 1942 before going into pro ranks as a minor official. Started as goal judge with the Cleveland Barons, became game timekeeper in 1949, a job he kept until the 1974-75 season with the Cleveland Crusaders. Appointed supervisor of minor officials in 1972. Retained that job until 1978.

After leading the Dandee Patches and Blepp-Coobs Sporting Goods teams to seven titles in the Lakewood Recreation League, he was appointed to select and coach an AAU team representing Cleveland in the 1939 national hockey tournament. Playing under the banner of The American Legion, the underdog Clevelanders won their first game in overtime and their next in double overtime to move into the championship game against the heavily favored University of Minnesota. The Kern-coached Cleveland club responded with a stunning 4-3 victory to annex the National AAU title.

Joined the Cleveland Barons on Christmas night, 1948, and remained with the team for 7-1/2 seasons during which time the Barons won the American Hockey League’s Calder Cup three times. Traded to Rochester for the 1956-57 season, played with the club for two full seasons and part of a third. Returned to the Barons in 1961-62 after sitting out most of the previous two campaigns and played three more years, playing on another Calder Cup championship squad in 1963-64, his final season.

Brought up to the Cleveland Barons to bolster the defense for the 1957 playoffs, he remained for 16 seasons. Set an American Hockey League record by playing in 526 consecutive games and captained the Barons for eight years. Was voted the team’s Most Valuable Player four times by his teammates and three times by the fans. In all he played over 1,000 regular season games in a Barons uniform and helped the team to the playoffs 15 times in 16 seasons. In 1966-67 he was picked as the Most Valuable Defenseman in the AHL and was named to the league All-Star first team.

Professional hockey star for 14 years, eight of which were spent with the Cleveland Barons. Was one of mainstays of 1947-48 Cleveland team which set a professional hockey record by going undefeated though 31 straight games. Named to American League All-Star team three times. Was the first league player to score 300 goals and ended his career as the league’s all-time scoring champion with 319 goals and 425 assists.

Member of 1968 U.S. Olympic Hockey Team. Collegiate All-American at Michigan State in 1966 when he scored 27 goals and assisted on 30 others in 30 games to leas his team to the national collegiate championship. Was first American-born player to complete season as leading scorer in Western Collegiate Hockey League, considered the strongest college league in the United States.