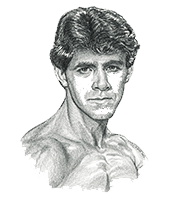 AJ Perry’s road to international acclaim during his 40 years as a Martial Artist began in front of the television set in his W. 162nd St. home in Cleveland’s West Park neighborhood. “The first time I saw the Green Hornet™ television show” AJ said, I was interested. “And then I saw ‘Marlowe,’ the detective show, with James Garner and Bruce Lee- I was definitely hooked!
AJ attended classes at St. Edward High School where he wrestled under Howard Ferguson. By age 15, he was practicing karate moves in a friend’s garage. That led to classes with Master Kim. AJ went on to teach Martial Arts at St. Ignatius High School in Cleveland. As his career as a Martial Artist started to take off, he began earning trophies and championships at local and regional competitions. He won several U. S. Open championships and in 2002 he took the bronze medal at the World Championships in Panama- third in the world. That, he says, was his highlight.
He was inducted into the World Traditional Martial Arts Hall of Fame in 2006. Master Perry was also inducted into the World Sokieship Council Hall of Fame in 2005.
Now 53 years old, AJ is an 8th degree Grand Master who lives in Vermilion and runs two Martial Arts schools, one in Amherst and the other in Lorain Community College . His son Aaron (3rd degree Black Belt), once his star protege, is now his assistant instructor.
Master Perry says among the great role models who touched his life are previous Greater Cleveland Sports Hall of Fame inductees Phil Bova, Ken McBride, Rich Rollins and Garry Roggenburk.
AJ’s full-time job is with Dominion East Ohio Gas (30 years) where he is a tech services specialist involved with fueling vehicles
powered by natural gas. AJ is President of The Three Deuce Five Foundation located in Brookpark, Ohio. He is a tireless volunteer for Marines in need, such as those suffering from post-traumatic stress disorder after service in Middle East war zones. His Martial Arts demonstrations have raised thousands of dollars for Marine support groups. One demonstration included completing 2,200 pushups in 90 minutes.
The word Samurai translated means to serve. Master Perry as a Martial Artist has chosen to serve Marines in need as well as instilling this same spirit into his students.
August 8, 2014/by admin
END_OF_DOCUMENT_TOKEN_TO_BE_REPLACED
https://www.clevelandsportshall.com/wp-content/uploads/cshof-logo-text.png 0 0 admin https://www.clevelandsportshall.com/wp-content/uploads/cshof-logo-text.png admin2014-08-08 17:57:082021-10-19 16:28:57Perry, A.J.