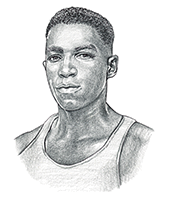 William DeHart Hubbard was the epitome of the unsung hero. Only a close inspection of the record books reveal the remarkable accomplishments of a true historical figure.

At the 1924 Olympics in Paris, Hubbard became the first African American to win a gold medal in an individual event when he won the long jump, notching a leap of 24 feet, 5.5 inches on his sixth and final attempt. That international stage was only part of his legacy.

A standout athlete and student at Walnut Hills High School in Cincinnati, Hubbard had to withstand the racism of the day, but did secure admission to the University of Michigan. The Wolverines benefited as he went on to become a three-time NCAA champion and seven-time Big 10 champion in track and field.

In perspective, Hubbard’s little-known status can be summed up in his Big 10 record of 25 feet, 3.5 inches set in 1925. It stood until heralded Jesse Owens broke it in 1935. The men would become friends years later when Hubbard left Cincinnati for Cleveland in 1942 to work for the Federal Housing Authority until retirement in 1969.

In 1948, Hubbard told The Plain Dealer of his Paris gold medal. “I was determined to become the first of my race to be an Olympic champion and I was just as determined to break the world (long jump) record,” said Hubbard.

Hubbard was named to the National Track Hall of Fame in 1957 and was posthumously selected in the second class of the University of Michigan Hall of Honor in 1979.

“He was not a boisterous person,” said friend and gold medalist Harrison Dillard of Cleveland. “There was a sense of gentleman about him.”

A longtime bowler, Hubbard was president of the National Bowling Association in the 1950s and was a founder of the baseball Cincinnati Tigers of the Negro American League.

Hubbard died in Cleveland at age 72 on June 23, 1976. The William DeHart Hubbard Scholarship Fund was established in 2010 through the University of Michigan. 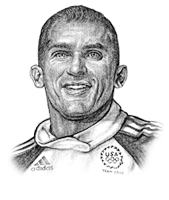 There did not appear to be much of an upside in pole vaulting for Tim Mack when he was attending St. Ignatius High School. While obviously dedicated, he never qualified for the state meet.

But the Westlake resident did not let the ups and downs of his unique event discourage him from achieving a historic goal. After attending Malone College and the Univesity of Tennessee, Mack put together one of the finest seasons in the sport in 2004. After winning the U.S. Olympic Trials with a Trials-record vault of 19-4 3/4, he won the gold medal at the Athens Olympics with an Olympic record of 19-6 1/4.

Definitely not resting on his laurels, he capped his season by setting another record at the World Athletics Final with a personal best of 19-8 1/4, the top mark in the world that year.

After his Olympic triumph, Mack’s career was slowed when he underwent surgery in October 2006 to repair a torn labrum in his right shoulder. The long road back culminated in his winning a second USA indoor title when he went 18-8 1/4 in 2010.

Graduating from Tennessee with a degree in Education, he went on to earn a masters in Human Performance and Sports Studies. He continues to coach and run clinics at the university. He is single.

Jack Staph has become a rite of the Cleveland spring.

It’s because when May rolls around, Northeast Ohio’s running community comes together for the annual Cleveland Marathon race and Staph has been at the center of the organization directing the event.

Through different course routes, the vagaries of Cleveland’s spring weather, the ups and downs of running participation, Staph has persevered to maintain the event through its various stages. For runners of all genders and ages, it has become a highlight event and Staph’s organization has accommodated participants with races of varying distances, including the popular 10-kilometer and half-marathon.

While adding to the economic well being of the city, it has also become a important fund-raising event for local charities. The Northern Ohio chapter of the Leukemia and Lymphoma Society, American Stroke Association and Cystic Fibrosis Foundation are a few of the charities that benefit.

Reaching out to area students, the races have encouraged participation from the Cleveland Metropolitan School District and the YMCA of Greater Cleveland.

In staying the course with commitment, Staph’s persistence has paid off as the race has grown in recent years to more than 15,000 participants. It has distinguished itself as one of the nation’s best organized events.

A graduate of Youngstown State and Cleveland State’s Marshall College of Law, Staph served as senior vice president and general counsel for Revco, D.S., Inc. from 1972 to 1997.

Staph, who found the time to run seven marathons, lives in Moreland Hills with his wife, Bernadette. They have three children.

One of the nation’s finest women’s track coaches for nearly a quarter century, he took the coaching reins of the Cleveland Division of Recreation Track Club (later the Cleveland Track Club) in 1957 and produced five Olympic and/or Pan-American Games contestants, including two-time Olympic Champion Madeline Manning. His athletes won and outdoors. He coached the U.S. Women’s Olympic Track Team in 1968 and 1976, and coached several National AAU squads before retiring after the ’76 Olympics.

A two-time National Decathlon champion (1938 and 1939) at Western Reserve University, he was a dominate figure in track during the heyday of the old Cleveland collegiate “Big Four.” Averaged approximately 30 points per meet during his college career which came to an end in 1940, scoring in the high and broad jumps, pole vault, sprints, hurdles and discus. An all-around athlete who competed in four other sports at WRU, he was twice named the Cleveland AAU’s Outstanding Athlete.

Member of 1964 U.S. Olympic Women’s Track Team and a member of the 1963 and 1964 AAU All-American Women’s Track and Field teams. Represented U.S. in international competition against Great Britain, West Germany, Poland and Russia. Set American records in the 800 meters and 880-yard run during one-week period in 1963. Set AAU Championships record in 800-meters in 1964.

Coached and sponsored the Cleveland Striders Track Club dating back to the early 30s. Early involvement with the Knights of Columbus Track Meet Association (1940) led him through ever higher positions of leadership culminating in 1965 when he became Director of the meet. He was one of the founders of the Catholic Youth Organization. Made a member of the U.S. Olympic Committee for Track and Field in 1964, he has continued to serve youth through leadership roles in the Lake Erie Association of the AAU.

A hurdler in the 1948 Olympic Games, she subsequently moved to Cleveland and more recently has distinguished herself as a competitor in the Master Program. In the Masters Pan American Games in Canada she won and set records in the Shot Put, Discus and Javelin. In 1983 she placed 2nd in the Shot Put and Discus and 4th in the Javelin in the World Masters Games and then again as recently as 1985, in the 55 to 60 years age group, placed 4th, 4th, 6th respectively in those same events.