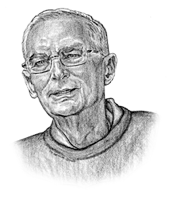 After playing varsity basketball at St. Francis College of Pennsylvania and serving two years of active duty in the United States Army, Larry Chernauskas moved to Cleveland where he became a revered high school basketball coach and math teacher.

At the age of 26, after only two years as an assistant coach (Gilmour Academy and John Marshall), Larry was named head coach at West Tech, where he stayed for the next 26 years (1956-82), accumulating a long list of championships and honors coaching the boys teams.

That was barely half of his coaching resume, however. He then made a seamless transition to coaching girls. He coached the girls teams at St. Joseph Academy (1982-85), Gilmour Academy (1985-91) and Magnificat High School (1991-97).

Larry’s combined overall record is 508 wins and 280 losses. At West Tech his boys teams won five West Senate championships. His girls teams at Gilmour advanced to the regional tournament four times. His Magnificat girls reached the regional four times and the state final four twice. He was named Cleveland area coach of the year four times—twice at West Tech and once each at Gilmour and Magnificat. In a Plain Dealer contest he was voted “Favorite Coach” by the readers in 1968.

In retirement he was honored by St. Edward High School with its “Most Respected Opponent” award. He was inducted into the Ohio High School Basketball Coaches’ Hall of Fame and halls of fame of St. Francis College, West Tech, Gilmour and Magnificat. He and his wife, Janet, have been married for 55 years and still live on Cleveland’s west side.