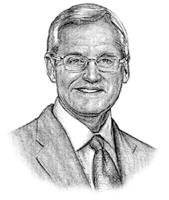 Before packed houses in Columbus and Ann Arbor, Tressel coached the Ohio State Buckeyes to an octet of victories over the University of Michigan. He lost just once to the arch-rival to the north.

Tressel is the only OSU head coach to win seven consecutive games against the Wolverines. The eight victories over Michigan are more than any Ohio State coach other than Woody Hayes (16 wins).

While the most die-hard OSU fans believe nothing can top a victory over Michigan, Tressel led the Buckeyes to the 2002 national championship with a double overtime victory over the University of Miami in the Fiesta Bowl.

The dramatic victory completed a perfect 14-0 season, the first such campaign in college football history and gave the Buckeyes their first national crown in 34 years.

It also earned Tressel the American College Football Association Coach of the Year award, making him the first coach in NCAA history to collect the honor in two divisions. Tressel had won it in 1991 and 1994 as the head coach at Youngstown State, a Division I-AA member school.

Tressel’s roots are deep into Greater Cleveland. He was born in Mentor, graduated from Berea High School, and played quarterback at Baldwin-Wallace under the watchful eye of his father, head coach Lee Tressel.

At YSU, Tressel dominated Division I-AA football, winning four national championships. The first one, in 1991, allowed him to join his dad as the first father and son duo to capture national crowns. Lee Tressel coached Baldwin-Wallace to the 1978 Division III title.

Tressel is currently serving as Vice-President of Strategic Engagement at the University of Akron.