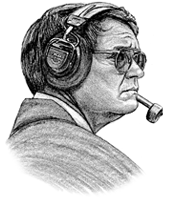 In a state famous for turning out great football coaches, Dick Crum ranks among the best ever from Ohio. This native of Boardman played college football at Muskingum and Mount Union Colleges. He started his coaching career as an assistant at Boardman in 1957. He moved on to Sandusky and Warren Harding before becoming the head coach at Mentor High School in 1963 where he compiled a 50-9-1 record over six years, including perfect 10-0 seasons on 1966 and 1968. Mentor opened the 1968 season with a shocking 19-0 victory over Massillon in storied Paul Brown Stadium and was ranked first in The Plain Dealer ratings and second in both state wire service polls the rest of the season.

In 1969 Dick moved on to Miami as an assistant coach under Bill Mallory and in 1974 Dick succeeded him as head coach. In four years Crum posted a 34-10-1 record with three Mid-American Conference championships and Tangerine Bowl victories over Georgia and South Carolina. In 1978 he moved on to North Carolina where over the next 10 years he became the Tar Heels all-time winningest football coach with a record of 72-41-3, one Atlantic Coast Conference title and six bowl game appearances where he registered victories over Michigan, Arkansas and twice over Texas. He was fired after the 1987 season and North Carolina has not won an ACC title since.

He finished his coaching career at Kent State from 1988 to 1990. He has received Mount Union College’s Award of Excellence and is a member of Miami University’s exclusive Cradle of Coaches Society. He is a member of six halls of fame, namely Boardman High School, Mentor High School, Ohio High School Football Coaches, Tangerine Bowl, Gator Bowl and Miami University. The Greater Cleveland Sports Hall of Fame is proud to welcome Dick into number seven.