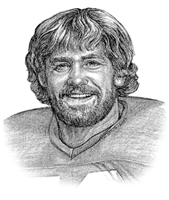 The multi-talented Bob Golic starred as a wrestler, football player and television entertainer in a career that began at St. Joseph High School (now Villa Angela-St. Joseph) on Cleveland’s east side, where he was an all-scholastic linebacker and state champion wrestler.

At Notre Dame Bob was a two-time all-American in both football and wrestling.Â  He was the middle linebacker on Notre Dame’s 1977 national championship football team.Â  He set a school record with 26 tackles in a win over Michigan and was the defensive MVP of Notre Dame’s 38-10 victory over Texas in the Cotton Bowl with 17 tackles and a blocked field goal.

As a heavyweight wrestler he compiled a 54-4-1 record and finished fourth and third in consecutive NCAA wrestling tournaments.

The New England Patriots drafted Bob in the second round in 1979.Â  When they released him after three seasons the Browns immediately claimed him and converted hm to nose tackle.Â  Bob went on to enjoy an eight-year career as a nose tackle with the Browns, who reached the AFC championship game three times with Golic at nose tackle.Â  He made all-pro twice and was picked for three Pro Bowls.

Bob played in the NFL for 14 years, the last four with the Los Angeles Raiders.Â  He retired after the 1992 campaign and became an actor and TV sports reporter.Â  He was a star on the sitcom “Saved by the Bell:Â  The College Years.”Â  Bob currently hosts a daily sports talk show on Akron radio station WNIR-FM (100.1).Â  Bob’s name also is on the marquee of a sports bar at the corner of West Sixth and Lakeside in the Warehouse District.