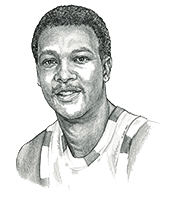 Elmore Smith was one of the greatest shot blockers in NBA history during his eight-year career in pro basketball from 1971 to 1979. Twice he finished as the league leader in blocked shots and set a single game record of 17 in one game, a mark which still stands 40 years later. He spent two seasons each with the Buffalo Braves, Los Angeles Lakers, Milwaukee Bucks and Cleveland Cavaliers.

The seven-footer’s name will always be associated with the greatest big men in basketball history, known as “Elmore the Rejector,” he was drafted by the Buffalo Braves and after two seasons was traded to the Los Angeles Lakers to replace Wilt Chamberlain. Two years later the Lakers traded him to Milwaukee for Kareem Abdul-Jabbar. Cleveland acquired him to replace Nate Thurmond as the backup center.

Although he had grown to seven feet tall by the time he was in high school in Macon, Ga, his career did not look promising. Only three colleges recruited him. He enrolled at Wiley College where the coach told him he probably never would get to play. Wiley had not won a game in three years. So Elmore transferred to Kentucky State which went on to win two straight NAIA national championships and Elmore was a two-time All-American.

He was the third player picked in the 1971 NBA draft and signed a multi-million dollar contract with Buffalo. For his career he averaged 13.4 points per game and 10.6 rebounds. Knee surgery in October, 1978, hastened his retirement. He remained in Cleveland and now, at the age of 65, lives in Beachwood. He is frequently seen at Cavs games. He also has a line of barbeque sauce available in many retail stores. Cleveland was by far the best experience, he once said, “The guys I played with were all good friends and we stay in touch.”

A nice entry
Scroll to top