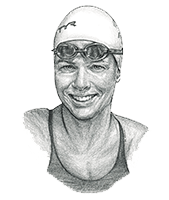 Erica Rose wasn’t born in the waters of the world. It just seems that way. The native of Cleveland Heights has swum in and around 16 countries.

Her list of accomplishments stretches from high school, to major college competition, to the international stage. Rose, who began swimming for the Lake Erie Silver Dolphins at the age of seven, was a two-time state champion and two-time runner-up in the 500 free at Hawken School where she lettered in all four scholastic years (1997- 2000). The Hawks won three state championships in her time at the Gates Mills school.

Erica was recruited by Northwestern University where she competed all four years in distance and individual medley events, advancing to a Big Ten Championship finals and an NCAA championship qualifier.

Rose excelled in open water events, enjoying a 12 year run of success that started at age 14. She was a member of seven World Championship teams, holds 10 national titles as well as seven Pan Pacific and Pan American titles.

She also scored a World Championship title in the 5K open wager swim in Perth, Australia in 1998.

Erica went out a winner. Although she had announced her retirement in 2011, she competed in the Manhattan Island Marathon Swim around New York City. At age 28, she won the grueling 28.5 mile test believed to be the longest swimming event in the world — with a time of 7 hours, 29 minutes and 46 seconds.

For added energy during the demanding Gotham swim she munched on sugary dried pineapple. For a light moment, Rose recalled having to tread water when a Norwegian Princess cruise ship was crossing her path.

Erica and her fiance, Brendan Dancik, live in Ann Arbor, Mi., where Erica is working on a dual degree in global public health and business administration at the University of Michigan. They will be married next month in Cleveland at The Arcade.