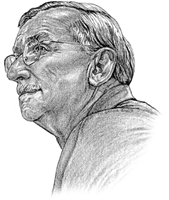 Jerry Holtrey knew how to bring home a winner.

The Hawken School swimming coach won the 23rd state championship of his career in 2011, with 21 of those coming with the girl’s team.Â  He guided the Hawks to their record-tying 13th straight title in 2011.Â  Since the OHio State Athletic Association added Division II in 2000, Hawken has won all 12 championships.

He also produced champions outside the high school level.Â  Coaching the Lake Erie Silver Dolphins, his swimmers have won every district championship, long course and short course, for the last 42 years and holding almost two-thirds of individual District records.

A native of Huntington, Indiana, he was a member of the 1957 Huntington YMCA nation championship team.Â  He went on to swim two seasons at both the University of Michigan and Indiana University, the latter under legendary coach James “Doc” Councilman.

After short coaching stints in Indiana and Kentucky, he took over coaching duties with the Silver Dolphins and began a teaching and coaching career at Hawkin in 1969.Â  He retired from teaching in 2008.

He has been the head and assistant coach for numerous national and international teams.Â  He was previously inducted in both the Ohio high school and national swimming hall’s of fame.

Along with his wife, Donna, they raised three children.