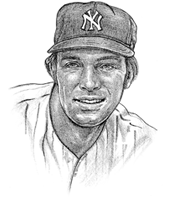 Mike Hegan’s name is familiar to Indians fans as Tom Hamilton’s partner on the Tribe radio broadcasts, but in a previous life he was one of the finest athletes ever produced by St. Ignatius High School. Mike made all-scholastic in both football and basketball and all-state in baseball. He was named Greater Cleveland Catholic High School Athlete of the Year in 1960.

After a year of college at Holy Cross in Massachusetts, Mike signed a baseball contract with the Yankees and went on to a 12-year Major League career with the Yankees, Seattle Pilots, Milwaukee Brewers and Oakland A’s as a first baseman. He played in the 1964 World Series with Oakland.

In 1969 he hit the first home run in Seattle Pilots history in his first at bat and was the Pilots’ only representative in the All-Star Game, a distinction that never will be duplicated. After only one year in Seattle the Pilots moved to Milwaukee and became the Brewers. Much like his father, Jim Hegan, a great defensive catcher for the Indians in the 1940s and 50s, Mike was known for his glove. In 1971 and ’72 he set the Major League record of 178 consecutive errorless games at first base, a record that stood until Kevin Youkilis of Boston eclisped it in 2007.

Mike retired in 1977 with a .242 lifetime batting average and entered broadcasting.Â  He was the television color commentator for the Milwaukee Brewers from 1977 to 1988. He joined the Indians broadcast team in 1989 on television and for the last 11 years teamed with Hamilton on the radio. He intends to retire after this season, ending 34 years in the baseball broadcast booth. He and his wife, Nancy, now make their permanent home in Hilton Head, S.C.