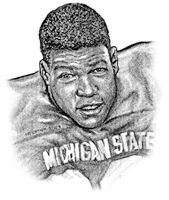 A standout hurdler at Cathedral Latin School, the powerful Jones scored only three touchdowns for the Lions during a three-year career shortened by injuries. But a self-commitment to excel on the gridiron transformed Jones into a powerful force during his collegiate career at Michigan State and with the Minnesota Vikings.

As a three-year letterman from 1964 to 1966 under MSU coach Duffy Daugherty, Jones accounted for 2,549 career all-purpose yards and 23 touchdowns. He led the Spartans in rushing and all-purpose yards his final two seasons while helping the Spartans to a combined record of 19-1-1, winning consecutive Big Ten championships in 1965 and 1966.

He led the Big Ten in scoring in 1965 when he scored 11 touchdowns and 68 points. As co-captain in 1966, he helped the Spartans go 9-0-1 and a No. 2 national ranking after the controversial 10-10 tie with Notre Dame. He earned All-Big Ten and All-American honors those years, finishing sixth in Heisman Trophy voting as a senior. He continued to run track in the spring for the Spartans, earning conference honors in hurdling events.

Jones was selected No. 2 overall by Minnesota in the 1967 National Football League Draft, MSU teammate Charles “Bubba” Smith going No. 1 to the Baltimore Colts. In seven NFL seasons, six with the Vikings, he accounted for 5,035 all-purpose yards and 21 touchdowns. The Vikings won three division titles and he played in the 1970 Super Bowl against Kansas City. He finished his career with San Diego in 1973.

He went on to become a licensed chiropractic doctor in 1981 and has practiced with his wife, Rosielee, in California for more than 30 years.