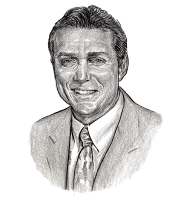 Mike Moran is a marathon man among Ohio basketball coaches.

Later this year he will celebrate his silver anniversary campaign at John Carroll. Previously, he was the head coach at St. Joseph High School for 11 years where he won two state championships. There were also nine seasons of freshman and junior varsity coaching at St. Joe’s and Cincinnati Elder.

As a head varsity coach at John Carroll and St. Joseph, Moran has won 667 games. While scholastic freshman and junior varsity records are sketchy, it’s believed Moran has won more than 750 basketball contests.

Moran, a 1973 graduate of Xavier University, is the winningest (443 games) and longest serving head coach in John Carroll basketball history.

He is coming off a season in which his Blue Streaks set a school standard with 21 consecutive victories on their way to a 26-4 record, the second winningest season in the annals of JCU basketball, a program that dates back to 1919.

His outstanding work has been copied at the highest level of collegiate basketball. Two seasons ago, Kentucky coach John Calipari adopted Moran’s “five in, five out” platoon system.

Moran not only wins basketball games, he makes basketball coaches out of players. More than 50 of those who played for Moran have gone on to emulate their former head coach. Many cite his enthusiasm for the game that he loves as their motivation to get into coaching.

Moran and his wife, JoAnn, live in Russell Township. They have six children and 14 grandchildren.