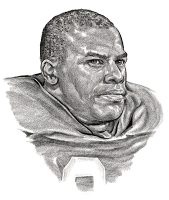 Kevin Mack is a Cleveland Brown, through and through. His entire nine-year career as a National Football League running back was in the orange and brown, and today he continues in the team’s front office as the Alumni Relations manager.

Mack played in 99 games for the Browns, rushing for 5,123 yards and scoring 46 touchdowns. He also caught 197 passes for 1,602 yards and eight touchdowns.

If the Browns needed a tough yard, Mack usually got the ball.

He ranks ninth on Cleveland’s all-time scoring ledger with 324 points. He is also the franchise’s fifth all-time leading rusher and joined the Cleveland Browns Legends in 2007.

Nicknamed “Mack Truck,” he was named to two Pro Bowls in 1985 and 1987 and was considered not only an all-star runner but an exceptional blocker.

A native of Kings Mountain, N.C., Mack played at Clemson University and then one year for the Los Angeles Express of the United States Football League before the Browns made him the 11th overall selection in the 1984 NFL Supplemental Draft of USFL and Canadian Football League players.

During his rookie year in 1985, Mack ran for 1,104 yards, seven touchdowns and 5 yards per carry. He combined with Earnest Byner (1,002 yards) to become just the sixth running back tandem in NFL history to each rush for 1,000 yards.

One of Mack’s most significant runs came in the final game of the 1989 season when, with 39 seconds on the clock, he dragged defenders over the goal line for a four-yard touchdown that earned the Browns a 24-20 victory over the Houston Oilers and the AFC Central Division title.