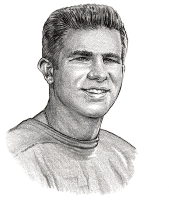 It was all about football and family for Sam Palumbo.

Growing up in Cleveland’s Collinwood neighborhood, he made a name for himself playing football and basketball for the Railroaders. He captained both teams into his senior season in 1951. As a defensive lineman, he earned All-East Side Senate, All-Scholastic and All-Ohio honors. He could have played in the City Championship basketball game, but as a mid-year graduate, he was already enrolled at the University of Notre Dame.

Earning a role as a defensive tackle, he was on the Fighting Irish varsity as a freshman under legendary coach Frank Leahy. He was an All-Midwest selection as a sophomore and on the once-tied 1953 team. After earning four letters, he was a first team All-Catholic pick and played in the North-South game in Miami.

The 195-pounder caught the eye of another legendary coach as he was selected by Paul Brown to play linebacker for the Browns as a fourth-round draft pick (No. 49 overall) in 1955. In the self-proclaimed highlight of his career, he replaced an injured Chuck Noll and helped the Browns defeated the Los Angeles Rams, 38-14, for the NFL title that year. Palumbo contributed an interception to the victory.

After another year with the Browns, he was traded to the Green Bay Packers for his final season of pro ball in 1957.

But football remained in his blood for the next 40 years as he became a dean of Northeast Ohio’s officiating ranks, retiring from both the gridiron and his insurance business in 2001. He was always helpful lending wisdom to young officials learning their way through the rules and regulations of the high school game.

He was honored with the Cleveland Touchdown Club Bobby Brown service award in 2002 and a member of the first class in the Greater Cleveland Football Officials Hall of Fame in 2009. He had been in the Collinwood HOF since 1992.

Through it all, he was with his high school sweetheart, Catherine,for more than 60 years of marriage. The couple raised five sons and a daughter, residing in Lyndhurst.