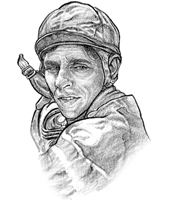 Tony Rini is arguably the most accomplished jockey ever born in northeastern Ohio.Â  He’s also the most courageous.Â  And to the delight of his friends and acquaintances, he’s probably the funniest.

Rini is the third thoroughbred jockey inducted into the Greater Cleveland Sports Hall of Fame.Â  He joins Danny Weiler, a former rival and one of his best friends, and the late Michael Rowland who rode for Rini when Tony turned to training.

It was a horrific accident during training hours at Oaklawn ParkÂ  in 1983 that ended Rin’s 24 years in the saddle, a career that saw him win 2,438 races and account for more than $10 million in purse earnings.

The accident left Rini with a broken back and a paralyzed left arm.Â  Doctors, after telling Rini he might never walk again, asked him if he would like to speak with a psychiatrist.Â  They feared he would attempt to kill himself.Â  He cautioned them that if they found him dead in the following moring, that he hadn’t done it.

Rini, born in Cleveland and reared on the near West Side, was introduced to racing at the Berea Fairgrounds where he hauled water buckets until a trainer gave him a leg up on a horse.

He won his first race at Thistledown in 1959 aboard Date Me.Â  It launched him on a path to nine riding titles at Thistledown and Randall Park.Â  He swept all four Thistledown riding championships in 1970 and his 287 winners that year ranked hm fourth in North America.

The outstanding season graduated Rini to the top level of racing at tracks like Churchill Downs, Keeneland and Arlington Park.

Rini participated in two Kentucky Derbys, finishing 19th on Jr.’s Arrowhead in 1971 and ninth aboard Chief Dixieland in 1978.Â  He did win the 1972 Illinois Derby on Fame and Power and returned home to win the 1973 Ohio Derby with Our Native.Â  Rini is now a trainer at Thistledown.Â  Among the riders he uses is his son, Wade Rini.