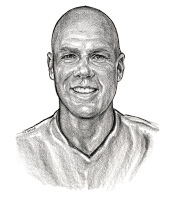 Brad Friedel epitomized both saving grace and stamina on the soccer field.

For more than a quarter century he staked his claim as one of the top goalkeepers in the collegiate, professional and international ranks. The 6-3 keeper, who switched from forward to the goalmouth growing up in Bay Village, holds the record for playing in 310 consecutive games in England’s highly-competitive Premier League with teams Blackburn, Aston Villa and Tottenham Hotspur from 1998 to 2015.

Beginning with an NCAA national championship at UCLA in 1990, he earned collegiate honors through 1992 as he won the Hermann Trophy as a junior before opting for a professional career. After stints in Scotland, Denmark and Ireland, he was Major League Soccer’s Goalkeeper of the Year with the Columbus Crew in 1997. That opened the opportunity to play in England, initially with Liverpool and eventually as a starter with Blackburn in 2000 to begin his Premier League reign.

In his first season with Blackburn, he helped the Rovers return to the top division Premier League. He was Blackburn’s player of the year when he had 15 shutouts during the 2002-03 season.

He also played for the United States national team in the 1992 Olympics and in three World Cups. He was dubbed “the human wall” for his outstanding work during the 2002 World Cup as the U.S. reached the quarterfinals with stirring wins against Portugal and Mexico along the way.

Before concentrating on soccer, Friedel was an all-state basketball selection at Bay, where he also played tennis. He was the school’s athlete of the year as a senior in 1990. Later that year he was invited to walk-on the UCLA basketball team as freshman.

Hoping to further establish the game at home, he founded the non-profit Premier Soccer Academy in Lorain for youth from 2007-2011. In 2016, he was named head coach of the United States Under-19 team.

A professional soccer player in Hungary in 1938, who then played in Italy from 1940 to 1945, he came to Cleveland in 1948 and played for several amateur teams before turning to officiating in the mid 50â€™s. Organized the Lake Erie Referees Association in 1957, and in 1962 became a charter member of the Intercollegiate Soccer Officials Association. Officiated hundreds of amateur league, high school, collegiate and professional games. Has been named to the United States Soccer Federation Hall of Fame and has been recognized by the NCAA for his officiating. (Deceased)

Fashioned an outstanding career as a soccer player stretching from 1921 to 1940. His administrative skills were vital in the strong development of soccer in the Greater Cleveland area through the Cleveland American Soccer League. The respect of his peers led to the title â€œMr. Soccerâ€ in 1958. He also was an early developer of indoor soccer. In 1967 he was inducted into the U.S. Soccer Football Association Hall of Fame.
(Deceased)

He arrived in the United States in 1978 bringing an impressive dossier of soccer credentials with him from native Finland to make a major impact on American soccer first as a player, and later as a player coach and eventually solely as a coach and teacher. Nowhere had that impact been stronger than in Ohio and particularly in the Greater Cleveland area. He began his American career in the North American Soccer League, playing for three years there and also playing indoors with the newly formed Major Indoor Soccer League. He joined the Cleveland Force for the 1982-83 season and gave the city its first genuine indoor soccer hero during five seasons in which his Nordic good looks and scoring feats so captivated the town that in a 1985 Plain Dealer poll asking readers to name the Top Ten Greatest Athletes in Cleveland sports history he finished third behind Bob Feller and Jim Brown. When the franchise floundered he left to join the Baltimore Blast in 1987-88 and 1988-89, only to return triumphantly as player-coach of the reborn Cleveland Crunch in 1988-89, continuing as a player here until his retirement in 1993. When his career in the MISL ended he ranked second in assists, third in points scored, eighth in total games played and 10th in goals scored and had the privilege of seeing his Number 12 become the first number retired in the 24-history of Cleveland indoor soccer. He has since served in a variety of coaching positions in professional, amateur and youth programs, and in 2005 became the head womenâ€™s soccer coach and assistant to the director of athletics at Clevelandâ€™s Myers University. He lives in Rocky River.

He came to Cleveland from Mississauga, Ontario, Canada in 1983 to play for pay for Clevelandâ€™s professional indoor soccer team, the Cleveland Force. His rookie season left ample room for improvement, covering five games and producing one assist. His chance to redeem himself would be a long time coming. It would be six years, and stints with the Minnesota Strikers and Los Angeles Lazers, before he would appear again in a Cleveland uniform as a member of the renamed Cleveland Crunch. It would prove to be an historic reunion, one which would last 15 years and enable him to make a convincing case for a permanent place on a list of the cityâ€™s all-time time finest athletes. When the case was closed in 2004 there was no disputing the verdict. The evidence included 1,223 goals and 761 assists in 685 regular season games, another 224 goals and 104 assists in playoff games, six league MVP awards, and election to 14 All-Star teams. Fourteen times he helped lead his team into playoffs and three times â€“ in 1994, 1996 and 1999 â€“ to the championship of the National Professional Soccer League. The first of those titles, in 1994, marked Clevelandâ€™s first in any professional sport since the Cleveland Brownsâ€™ NFL championship in 1964. When he retired as the all-time leading scorer in professional indoor soccer, he had for some time been generally acclaimed as the best indoor soccer player in U.S. history. In May of 2005, the Major Indoor Soccer League cemented that claim by announcing its Most Valuable Player Award would henceforth be known at the Hector Marinaro Trophy. The popular Marinaro elected to remain in Cleveland after his retirement and currently makes his home in Brunswick with his wife, Jodi, and their two children.

A Pennsylvanian who moved to Cleveland to play for the American Hungarian team, George Caraffi and his brother Ralph were the city’s best soccer players of the 1920’s. Originally a defender/midfielder, he gained his greatest fame as a center forward. He twice scored seven goals in a game, but his biggest goal came on June 23, 1929; the winning goal against Hakoah of New York, the U.S. National Champions. In the Western finals of the 1928 National Challenge Cup, he scored two overtime goals in a 4-1 victory and the clinching goal in a 2-1 win in early rounds, and the goal which gave his team a short 3-2 lead in overtime of the finals.
(Deceased)

Born in Pennsylvania, Ralph Caraffi came to Cleveland in 1925 to play soccer for the American Hungarians and scored three goals in his first appearance to signal what was to be an exceptional career spanning several years. His team reached the Western Finals of the National Challenge Cup two out of three years, won the Ohio State Cup competition in 1926, 1927 and 1929, and was National Runner-Up in 1930. Ralph was elected to the National Soccer Hall of Fame in 1959.
(Deceased)